Business Insurance
Commercial insurance covers you and your business assets.

Life Insurance
Life insurance to protect your family, assets, and their future.

Health Insurance
Coverage you need to protect your family and yourself.. 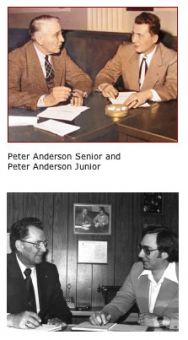 Our agency was established in 1932 when Peter Anderson Sr. began selling insurance policies from his home. He started selling part-time to friends and family, so that their home or business would be protected from fire damage. His venture eventually began to take off. In 1947, he decided to commit his efforts to the community full time.

Soon after, Peter Sr. took on some help. His son Peter Anderson Jr. joined what became Anderson Insurance Agency, thus starting a family business and tradition. Peter Jr. helped move the agency to downtown Eagle River, showing the community that the agency was here to serve the people. Through expansion into additional coverage, primarily life and health, he continued to climb, showing the community the agency's dedication to being number one.

In 1972, Peter "Tripp" Anderson III jumped into the agency with both feet. Through his drive, he expanded the business greatly through all types of insurance including homeowners and automobile insurance. He moved the agency to it's present location, where he continues his work. In the process, he orchestrated the purchasing of four other insurance agencies. He currently strives to continue his expansion into the financial services area.

During his quest, he brought aboard his oldest son, Peter Anderson IV, in 1994. When Peter joined his father, his mission was to take the agency to the next level. Through expanding the business in commercial lines, he continued to acquire connections with the community. During this time, the staff at the agency grew extensively. In order to assure customer satisfaction, he has put greater focus on the business management. That's why he sought help from his younger brother.

To keep the family tradition alive, Michael joined the family-run agency in 2006. He focuses on maintaining the agency's small-town, personal feel, which has always been so important to the Anderson family throughout the years.